Grace Around the World (CD/DVD) 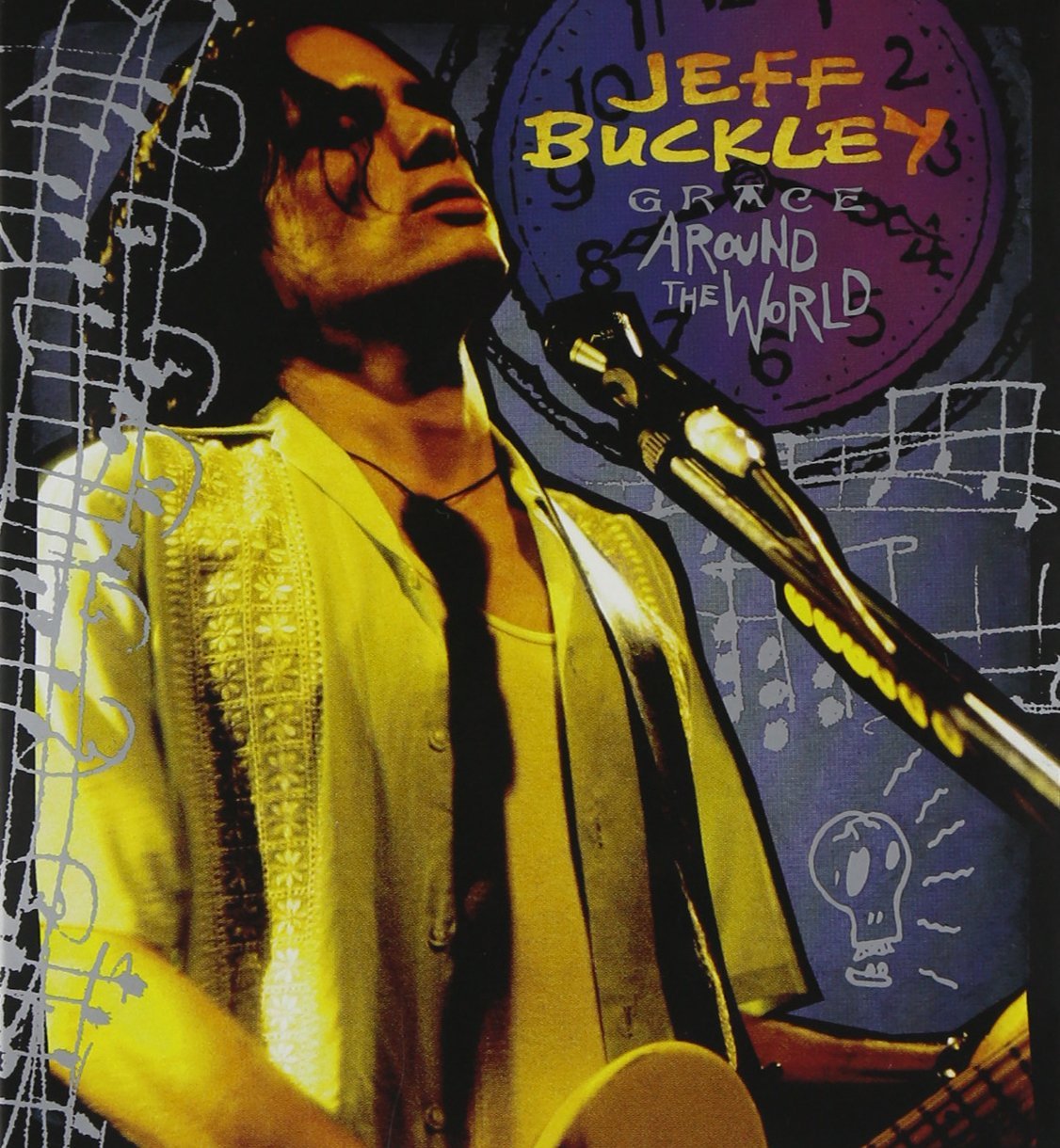 As a tribute to the enduring and expanding popularity and critical acclaim that continues to be devoted worldwide to Jeff Buckley more than a decade after his death, GRACE AROUND THE WORLD – to be issued in two separate multi-disc packages -provides the most comprehensive and exciting musical portrait of the artist seen to date.
Executive produced by Mary Guibert (Buckley’s mother), GRACE AROUND THE WORLD focuses on previously unreleased live performances circa 1994-95, in concert and television locales ranging from the U.S. and UK, to Germany, Japan and France (where Buckley was the #1 best-selling international catalog artist in 2008). Accompanying the 108-minute GRACE AROUND THE WORLD DVD will be an audio CD counterpart.

A special limited-edition deluxe package of GRACE AROUND THE WORLD will also contain the one-hour documentary DVD, Amazing Grace: Jeff Buckley, thus totaling 169 minutes (nearly three hours) of Jeff Buckley footage for his fans. In advance of this summer’s 15th anniversary of the release of Grace, Buckley’s landmark debut album (August 1994), the two GRACE AROUND THE WORLD packages will be available at all physical and digital retail outlets starting June 2nd through Columbia/Legacy, a division of SONY MUSIC ENTERTAINMENT.

There are three components to the deluxe GRACE AROUND THE WORLD package.
First there is the DVD, GRACE AROUND THE WORLD, bearing witness to the fact that Buckley onstage was a transcendent force. In a unique concept, the main program of this DVD presents previously unreleased distinct versions of the songs from the Grace album, culled from a variety of television sources. These include 1994 U.S. shows at Howlin Wolf in New Orleans (“Dream Brother”) and the JBTV acoustic performance in Chicago (“Lover You Should Have Come Over,” the only previously released clip). The balance of the songs all date from 1995: the BBC’s Late Show in London (“Grace”); the tv show Live Aus Dem Sudbahnhof in Frankfurt, Germany (“So Real,” “Mojo Pin,” “What Will You Say”); MTV Japan (“Hallelujah”); MTV’s Most Wanted in London (“Eternal Life,” “Last Goodbye”); and MTV Europe’s coverage of the Eurokeenes Festival in Belfort, France (“Lilac Wine”).

(Note: Buckley’s rarely-performed Qawwali-influenced “What Will You Say” appears instead of Grace’s Benjamin Britten adaptation of “Corpus Christi Carol,” which Buckley did not perform on-tour.)
The GRACE AROUND THE WORLD DVD includes 33 minutes of bonus features. These begin with three songs performed in New York for MTV’s 120 Minutes (“Grace,” “So Real,” “Last Goodbye”), then “Vancouver” (from MTV’s Most Wanted in London), and conclude with the original music video for “Hallelujah” (directed by Ernie Fritz). In between are behind-the-scenes on-the-road segments for VH1’s Naked Café, and the Merri Cyr bus interview.

For those preferring to watch the concert footage without the interview segments that appear between songs, a “Just Play the Music” feature will enable the viewer to bypass the interview footage.
The second component of GRACE AROUND THE WORLD is an audio CD configuration of the 10 live song performances from the DVD, all previously unreleased on CD. The disc will also feature previously unreleased additional versions of “Grace” and “So Real” from a 1995 performance on MTV’s 120 Minutes.

The third component of GRACE AROUND THE WORLD is Amazing Grace: Jeff Buckley, a one-hour DVD documentary created by Indie Filmmakers and fans of Jeff, Laurie Trombley (who was Jeff’s first fan mail reader/intern while in college) and Nyla Bialek Adams, and sanctioned by Mary Guibert. Included are rare performances and outtakes (culled from the Columbia Records archives), footage, and interviews with him. There are interviews with a variety of artists (painter, dancer, poets, singers, and so on) who pay tribute to Buckley’s influence on them. Interviews also include all three surviving members of the Jeff Buckley Band, friends, family, colleagues, DJ’s, producers, critics and fans.

Amazing Grace: Jeff Buckley travels from Sydney, New York and London, to Memphis, Montpellier, and Los Angeles, as it presents a very indie and intimate look at Buckley’s relationship to his music. The film has been screened 30 times over the past several years and has won numerous festival awards, including the Seattle Film Festival, San Francisco World Film Festival, CMJ, among others.
Finally, GRACE AROUND THE WORLD will include a liner notes booklet curated by Jeff’s former publicist Howard Wuelfing. The notes will be a montage of interviews with Mary Guibert, band members Michael Tighe (guitar, backing vocals), Mick Grondahl (bass), and Matt Johnson (drums), members of Buckley’s touring team, and press quotes from vintage tour reviews.

The magnitude of Jeff Buckley’s popularity around the world is underscored by the continuing best-selling sales of Grace in 2008-2009, with total worldwide sales over 3.4 million copies. Australia leads the tally at 6-times platinum. France, Ireland, Belgium have all logged double-platinum sales. The UK, Canada, Germany, Italy, Netherlands, Norway, New Zealand, Denmark, and Czech Republic are all in the platinum column. And Grace is gold in the U.S. (over 800,000 copies sold), Sweden, Switzerland, and Portugal.

The centerpiece of GRACE AROUND THE WORLD is “Hallelujah,” the Leonard Cohen song that became a signature track for Jeff Buckley. The song went to #1 on the Billboard Hot Digital Songs in March 2008 (his first #1), and was certified RIAA platinum on April 22nd, for sales over one million copies. It has been heard at countless crucial moments in movies and on such television shows as the season finales of The O.C., The West Wing, Third Watch, and Without A Trace. In the February 2009 issue of Blender magazine, “Hallelujah” was featured as that month’s “Greatest Song Ever” (a monthly feature).

In the UK, “Hallelujah” began to enjoy renewed commercial success as a digital download single in late 2008, when a version by X Factor winner Alexandra Burke and Buckley’s original studio version (from Grace, the best known version) hit #1 and #2 respectively on the UK Singles Chart. Each has sold hundreds of thousands of copies since then, making it the fastest-selling digital single in European history. Leonard Cohen’s original 1984 version of the song also hit the UK chart at #34. Back in 2005, it was named the 10th greatest Canadian song of all time in Chart magazine’s annual readers’ poll.
For the definitive tourography of Jeff Buckley’s shows from 1991 to ’97, go to:http://www.jeffbuckley.com/rfuller/buckley/tourography/kfaktourog4.html

GRACE AROUND THE WORLD AVAILABLE IN TWO PACKAGES
And, will be available at both physical
and digital retail outlets starting June 2, 2009,
through Columbia/Legacy

STANDARD PACKAGE INCLUDES:
1) Grace Around The World DVD featuring previously unreleased TV performances from U.S., UK, Germany, Japan – and France, where Buckley was the best-selling international catalog artist of 2008
2) Grace Around The World CD featuring audio versions of all the tracks
on the DVD plus two additional previously unreleased tracks