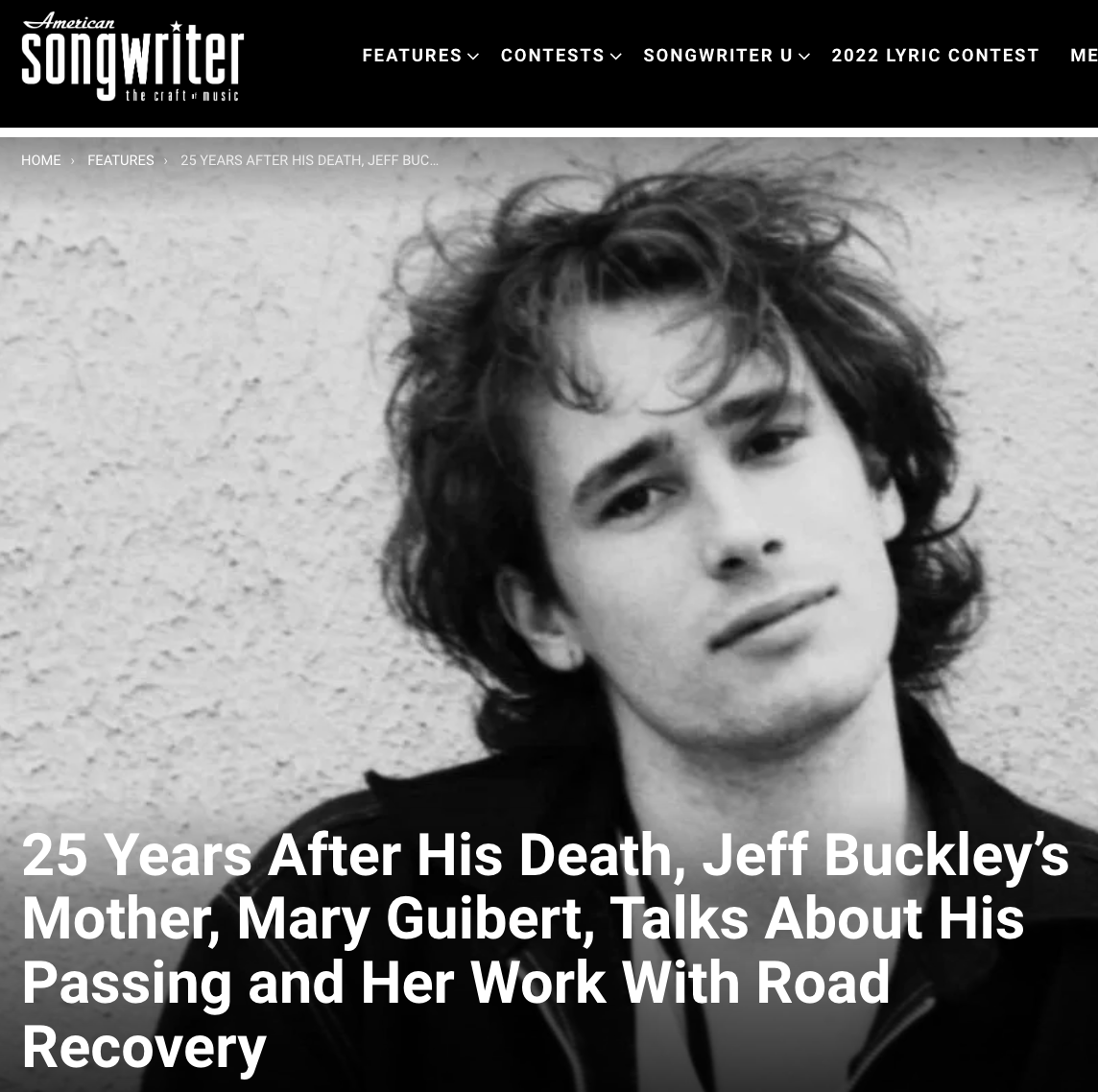 American Songwriter: 25 Years After His Death, Jeff Buckley’s Mother, Mary Guibert, Talks About His Passing and Her Work With Road Recovery

Read the interview with American Songwriter

When the singer/songwriter Jeff Buckley died mysteriously in Memphis, Tennessee, nearly 25 years ago on May 29, 1997, a giant hole formed in the hearts of music fans. Gone was the 30-year-old’s immaculate singing voice and his charm in the world of music.

But more significantly than that, it left a hole in the heart of his mother, Mary Guibert. However, Guibert wasn’t going to let the sadness of losing her son overtake her. She decided to be proactive.

The fruit of that determination is the non-profit organization Road Recovery, which Guibert co-founded with industry professionals and Buckley’s associates, Gene Bowen and Jack Bookbinder. Road Recovery works to help bring to light issues with addiction and young people in the music world with the hope of preventing unnecessary deaths like Buckley’s.

We caught up with Guibert to talk about her son and the work she’s done in the wake of his passing. These were not easy questions, nor were they easy answers. But we’re thankful for Guibert’s work and her responses in this interview.

American Songwriter: After hearing about Jeff’s passing in Memphis 25 years ago on May 29, 1997, how long after did it take you, and what was the chain of events that led you, to believe you could be proactive and helpful in the future in the wake of such sadness?

Mary Guibert: The saga of Jeff’s disappearance, the recovery of his body six days later, and the subsequent events are far too personal and epic to relay here. As to the question, “What led you to believe you could be proactive and helpful in the wake of such sadness?,” the answer would be: Everything I knew about my son and the details of his life, personal and professional, led me to that conclusion. I’ll let my work stand in testimony as to whether I was up to the task.

AS: What did it take to get Road Recovery off the ground in the early years?

MG: Probably the biggest hurdle for Road Recovery, in the beginning, is the same thing all non-profits face: how to create and sustain programs that help people who don’t have money but are financially self-sustaining. The answer to that is, don’t give up.

AS: What is the relationship between addiction and popular music that you’ve seen and what about it are you trying to change, exactly?

MG: Well, there’s no denying the connection between addiction and popular music culture which gave us tropes like “sex, drugs, and rock-and-roll.” It’s a connection that rock culture created and celebrated in song. The other unavoidable connection is the number of musicians and artists we’ve lost to drug overdose (which only highlights the tragic loss of exponentially more “normal people” to that end). Road Recovery’s mission was to become the antidote to that ill-fated connection.

AS: What have you seen as the successes of the work—either in general or in the case of a specific person or two?

MG: What we don’t see as often, for privacy reasons, are artists and others who’ve overcome addiction and the despair that leads to it. It was Gene and Jack’s particular charm and relationships in music and entertainment that convinced a few, and then a lot more, to openly declare their vulnerability about their personal adversities, for the sake of a program that would USE music and creativity. Such as a means to teach coping and communication skills, as its mission is to prevent at-risk young people from falling for the trap of self-destruction.

Ever since its inception, a succession of rock legends have offered their very precious time, whether performing for fundraising concerts or showing up to sit in on group meetings to tell their personal stories, or guest appearing on recording projects with kids. The program has also attracted industry professionals who’ve served on the board as well as in other capacities, their contributions are incalculable.

AS: How can someone who hasn’t heard of the work until now get involved to help themselves or others?

MG: We definitely want to get the word out to more parts of the country. Now that Road Recovery is being recognized for the substantial and consistent success of their methodology, this is a magnificent opportunity for their model to be duplicated everywhere in the country—big city or small. They have a website, and they’re ready to share their wisdom.

AS: As hard as it is to imagine, if you could see Jeff one more time, what would you say to him?

MG: If I could see Jeff one more time, I’d say, take me with you.

AS: If you could wave a wand, what would you change about the world of music as it relates to addiction?

MG: If I could wave a wand over the music industry, I’d change the same thing I’d change in the whole world—I’d neutralize all greed and turn it into compassion and fair play.

AS: Now, more than two decades later, what impact would you say Road Recovery has made on the world?

MG: There’s no way to quantify the impact Road Recovery has made on the world in 24 years of existence. What we do know is that its ability to achieve the level of success it has is a game-changer for the lives of every participant—past and future. The long-term effect of more music and less tragedy is beyond our dreams to imagine. But let’s try.

AS: What’s next for you and your work?

MG: What’s next for me? Who knows? I just keep doing my best to curate the legacy as best I can. One. Day. At. A. Time.