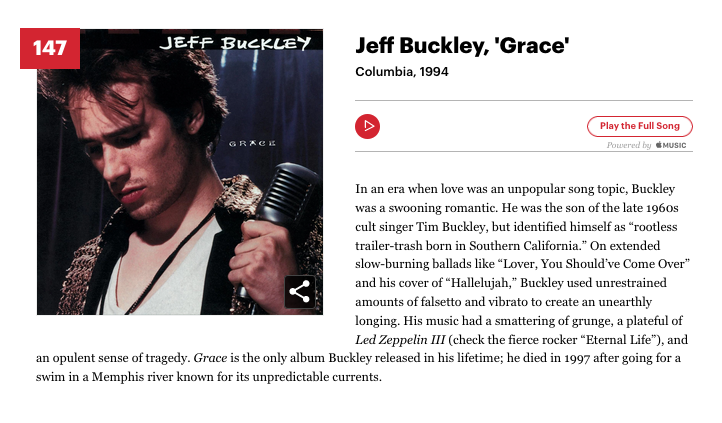 Jeff Buckley has once again been featured on Rolling Stone’s Greatest list.

“In an era when love was an unpopular song topic, Buckley was a swooning romantic. He was the son of the late 1960s cult singer Tim Buckley, but identified himself as “rootless trailer-trash born in Southern California.” On extended slow-burning ballads like “Lover, You Should’ve Come Over” and his cover of “Hallelujah,” Buckley used unrestrained amounts of falsetto and vibrato to create an unearthly longing. His music had a smattering of grunge, a plateful of Led Zeppelin III (check the fierce rocker “Eternal Life”), and an opulent sense of tragedy. Grace is the only album Buckley released in his lifetime; he died in 1997 after going for a swim in a Memphis river known for its unpredictable currents.”

Check out Jeff’s feature and their entire list here.