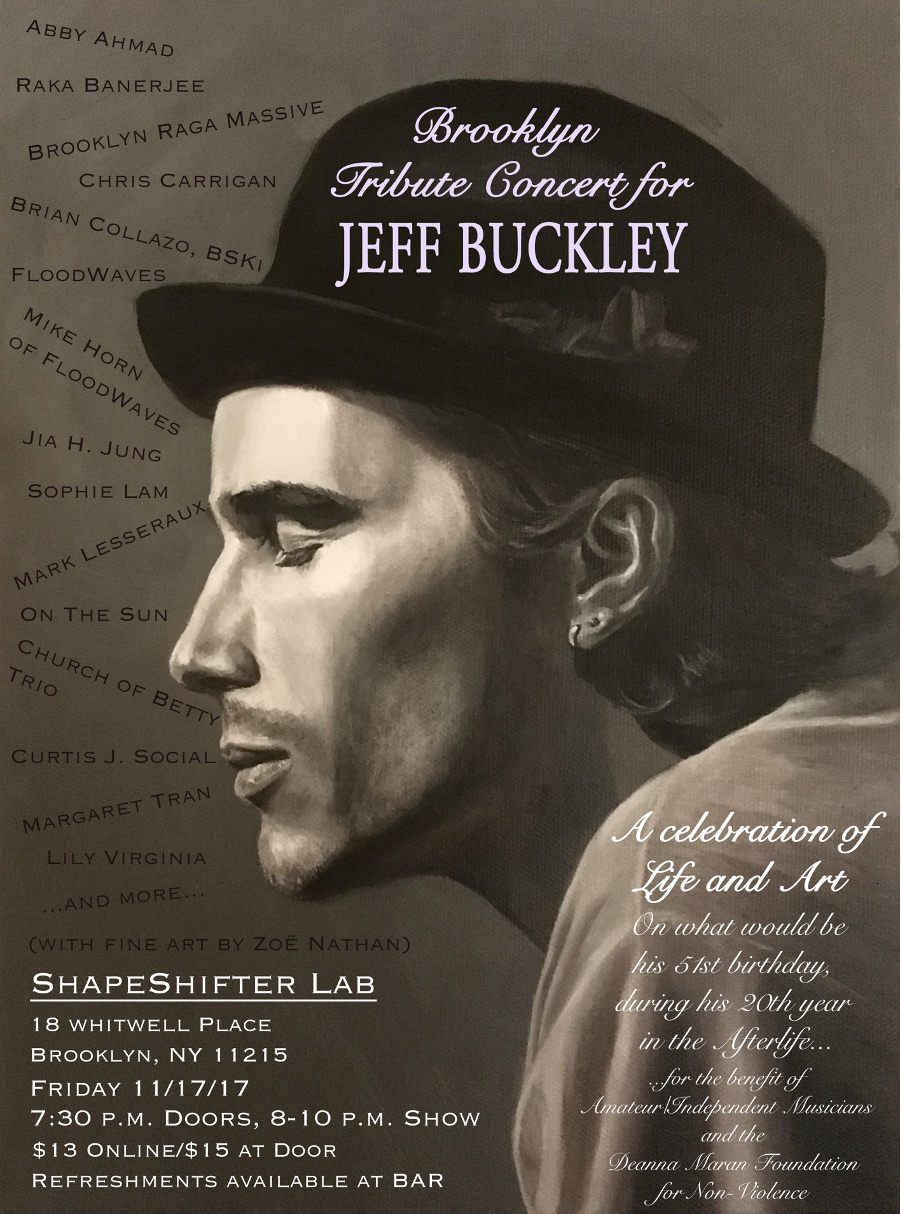 Around 2017, when the idea of starting a Brooklyn Jeff Buckley tribute concert intensified in my mind, I wasn’t in the music industry and had no direct event production experience. But deep in my seventh year of living in New York City, I certainly knew enough musical artists who would be down for an intimate night of earnest covers.

I also didn’t feel that I would be stepping on the toes of the ultimate tribute at Uncommon Ground in Chicago, or the one that was going on at Arlene’s Grocery in Manhattan’s Lower East Side at the time. There was room for more honoring of Jeff’s music, and I was going to take my shot at carving out something different.

A humble vision turned huge right away because of my choice of venue and a drive to get as many of Jeff’s songs as possible into the program.

When I shut my eyes, I could already just see and hear Jeff’s music being played at ShapeShifter Lab in Brooklyn – an open-plan, ADA-compliant, lilac-lit warehouse space that was already home to many jazz performances, recording sessions, and community events. I made a serious inquiry in the summertime and they responded affirmatively.

I had a bit of an out-of-body experience as I fronted hundreds of dollars of cash for the rental, but plowed on, confident that I could recover. Once I secured the spot, I started reaching out to people to fill the lineup. I contacted individual friends, Susan Hwang and her Bushwick Book Club network, former coworkers at ASCAP, and even a Tinder match – a Jeff Buckley fan who moved to Colorado before I ever got to meet him.

Soon, my trouble was streamlining the program, not filling it. When the program went over 20 songs, Marián Gomez Villota, the sound designer building the house backline, cautioned me to build in time between songs to allow for set changes. Following this golden advice made the difference between disaster and eerie perfection – to the minute – in execution.

When it came to selling tickets, I just wanted to break even. More important, I wanted to reach people who loved Jeff’s music. When I visited the official Jeff Buckley website, I was greeted by a whole section devoted to supporting tributes. As if throwing coins into a well, I poured my heart out into the online submission form.

I almost fell out of my chair when I got a personal response a few days later from Alison over at Jeff Buckley Music. She would be instrumental in helping publicize the concert that year and each year thereafter.

The inaugural performance was a huge success. I felt as if I were watching a concert someone else put on. Jeff’s kaleidoscopic music refracted in infinite and brilliant directions thanks to the diversity of performer and their heartfelt renditions. This was no cover night – it was a grand concert and a testament to Jeff’s music and people’s persistent love of it. Musicians even got some pocket money out of the proceeds, and the majority of them donated to the local-impact charity of the year.

A real discovery for me was the producer’s pleasure of watching people watch the show, watching musicians watch one another, and watching people connect with one another. That might sound creepy or voyeuristic, but I just mean that there was an added dimension of fulfillment in seeing people laughing, crying, cheering, applauding, hollering, and vibing in shared rapture over hearing Jeff’s music.

Something I had merely craved and imagined suddenly now existed in real life, all because there were people out there who wanted the same thing and I was so lucky as to find them.

By the end of the night, I knew that I had to do this again, no question. I think I started planning the next concert the morning after.