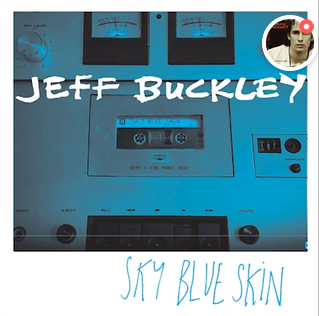 August 23, 2019 marked the 25th anniversary of the release of Jeff Buckley’s Grace and Columbia/Legacy Recordings, the catalog division of Sony Music Entertainment, commemorated the occasion with an epic expansion of the artist’s catalog online and multiple first time digital releases, including the long-awaited first-ever official release of “Sky Blue Skin,” a highly-sought-after collector’s track, one of the last demos recorded by Jeff at his final studio session in 1996.

A companion video for the track was released today. Watch HERE!

Partnering with Temple Cache, a France based animation and production company, the video for “Sky Blue Skin,” was created using their signature collage based animation style. Using photos and videos of Jeff and scans from Jeff’s personal journals, Temple Cache created this one of a kind piece. The video itself serves as an intimate journey through the mind, words, and music of a brilliant artist.

“Finding this recording of this song, this work in progress, is like finding a nearly finished painting stashed in a fine artist’s abandoned storage space. As for the video, I could not have imagined a more fitting visualization of this melancholy and penetrating performance,” said Mary Guibert, the artist’s mother.

Jeff Buckley’s rare demo “Sky Blue Skin” has finally been released. Recorded at the late singer’s final studio session on September 13th, 1996, the track has been sought after by fans and collectors for two decades.

The stripped-down song clocks in at nearly six minutes, with Buckley’s vocals swimming through a funereal abyss. “I already see the ghosts on the sidewalk/Kissing in the hereafter,” he sings, before repeating, “Chances are you wouldn’t even recognize the man I am now.” The final seconds feature a snippet of Buckley talking in the studio. “That’s all,” he states. “That’s all it is.”

The “Sky Blue Skin” demo is part of the massive digital expansion of Buckley’s catalogue. His legendary debut Grace, which celebrated its 25th anniversary last week, was reissued with an unreleased track, “Strawberry Street,” which he wrote in the late Eighties. In addition to the reissue, four live albums have been released, as well as more than 50 tracks and a sparkling merchandise line.

In October, a collection of Buckley’s journals, lyrics and ephemera will be published via Da Capo Press. The book, titled Jeff Buckley: His Own Voice, was edited by Rolling Stone senior writer David Browne and Buckley’s mother Mary Guibert. “There have been and probably always will be those who wish to speak for my son, take credit for his success or put words in his mouth,” Guibert said in a statement. “In choosing these pages to share with the world, I’m giving him the chance to speak with his own voice, for the record… and for his fans to see what a sweet, funny, amazing human being he was.”