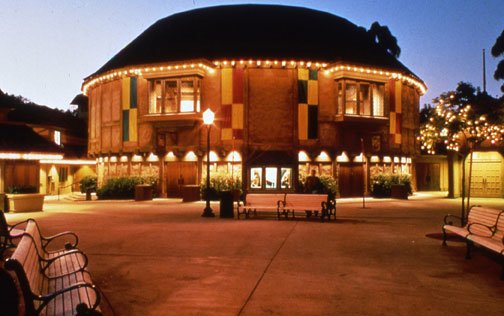 SAN DIEGO (April 10, 2013)—The Old Globe will open its 2013-14 Season with The Last Goodbye, a new musical that marries Shakespeare’s Romeo and Juliet and the incendiary songs of the legendary singer-songwriter Jeff Buckley. Conceived and adapted by Michael Kimmel, the rock musical is directed by two-time Tony Award nominee Alex Timbers (Peter and the Starcatcher, Bloody Bloody Andrew Jackson). Choreography is by Sonya Tayeh (“So You Think You Can Dance”), and orchestrations, music direction and arrangements are by Kris Kukul. The complete creative team and casting, as well as the remainder of the Globe’s new season, will be announced at a later date. The Last Goodbye will run on the Donald and Darlene Shiley Stage in the Old Globe Theatre, part of the Globe’s Conrad Prebys Theatre Center, Sept. 20 – Nov. 3, 2013. Preview performances run Sept. 20 – Oct. 5. Opening night is Sunday, Oct. 6. Tickets are currently available by subscription only. Tickets can be purchased online at www.TheOldGlobe.org, by phone at (619) 23-GLOBE or by visiting the Box Office at 1363 Old Globe Way in Balboa Park.

The Last Goodbye is a remarkable fusion of the classic and the modern, melding Shakespeare’s Romeo and Juliet, in its original text and period, with some of the most thrilling rock music of the past 20 years, staged with limitless invention by one of the true theatrical visionaries at work today. That light in yonder window is still the east and Juliet is still the sun . . . but the sound in her bedchamber is all new: the sweeping, emotional and extraordinarily beautiful songs of the late rock icon Jeff Buckley. The Last Goodbye views the feud between the Capulets and the Montagues firmly from the perspective of the young people it impacts most, and the violence, turmoil and passion in the public streets and private rooms of Verona are given voice not only through Shakespeare’s celebrated poetry but also through music that is intimate and epic, raucous and sublime.

The Old Globe is pleased to produce this new version of The Last Goodbye by special arrangement with Hal Luftig, Ruth and Steve Hendel, The Marks-Moore-Turnbull Group and Executive Producer Lauren Fitzgerald. An earlier version had its world premiere at Williamstown Theatre Festival in the summer of 2010, where it broke all box office records for Williamstown’s Nikos Stage. The new version opening at The Old Globe reflects two years of developmental workshops under the direction of Alex Timbers.

“I am deeply proud and very excited to launch the Globe’s 2013-14 Season, and my tenure as Artistic Director here, with The Last Goodbye,” said Barry Edelstein. “This daring, moving and hugely entertaining work brings together many of the things that are central to the Globe’s identity: a classic text, the vibrant energies of the musical theater, a sumptuous and splendid production and a creative team of the first rank in the American Theater. It’s a particular thrill to welcome Alex Timbers to the Globe, an artist whose work delights and surprises and whose sensibility renews the American musical in ways I both appreciate and admire. I know that audiences in San Diego and beyond will love this powerful and original show.”

“I cannot imagine a better launching pad for this project than The Old Globe,” said Mary Guibert, mother of the late Mr. Buckley. “Michael Kimmel’s concept, which combines Jeff’s music and the Bard’s words, lifts the story to another level, entirely . . . and it rocks! I can’t wait to share it with the world.”

Michael Kimmel is the Creator/Adaptor of The Last Goodbye. In concert, The Last Goodbye has been performed at Wild Project, Joe’s Pub at The Public Theater and Westside Theatre (produced by The Public Theater). Kimmel is also the creator/writer of Turn of the Screw, a modern, musical adaptation of the classic Henry James novella with music and lyrics by Drew Gasparini (“Smash”). Turn of the Screw had its concert debut at Lincoln Center this past summer. Kimmel and Gasparini are also collaborating on the anticipated Untitled Pop Musical, focusing on the rise and fall of pop star Jenna Styles, expected to debut in summer 2013. In addition, Kimmel is the book writer for Painless, with music and lyrics by Zoe Sarnak, whichrecentlydebuted at Joe’s Pub. He is a graduate and adjunct faculty member of Fordham University’s Theatre Program at Lincoln Center.

Jeff Buckley (Music and Lyrics) was born in California’s Orange County on November 17, 1966 and died in Memphis on May 29, 1997. He had emerged in New York City’s avant-garde club scene in the 1990s as one of the most remarkable musical artists of his generation, acclaimed by audiences, critics and fellow musicians alike. His one and only full-length, full-band studio album, Grace, released in 1994, includes his haunting cover of Leonard Cohen’s “Hallelujah.” Buckley and his band spent the following two years touring the world in support of the album, and though he was largely ignored by U.S. audiences, who were fully involved in the grunge movement, his sensitive and soaring vocals, virtuoso guitar and gripping performance style were critically acclaimed throughout Europe, the U.K. and Australia. He was awarded France’s prestigious Grand Prix International du Disque de l’Académie Charles Cros in 1995, as well as Platinum Record plaques from France, the U.K. and Australia. In May of 1997 in Memphis, on the verge of recording his second studio album, Buckley perished in an accidental drowning while taking a late-night swim in the Wolf River Marina. The songs he had been working on were posthumously released as Sketches for My Sweetheart the Drunk in 1998, which received a Grammy Award nomination for Best Male Rock Vocal Performance. Today, Grace is ranked among the 500 greatest albums of all time by Rolling Stone magazine, and Buckley’s recording of “Hallelujah” was voted number one among the top 100 vocal performances of all time by Mojo magazine (U.K.).

Alex Timbers (Director) is a two-time Tony Award-nominated writer and director and the recipient of Lucille Lortel, Drama Desk and Outer Critics Circle Awards, as well as two Obie Awards. His Broadway credits include Peter and the Starcatcher (co-director, Obie Award, Tony nomination for Best Direction of a Play), Bloody Bloody Andrew Jackson (director and book writer, Drama Desk Award, Tony nomination for Best Book of a Musical, Lortel and OCC Awards for Outstanding Musical) and The Pee-wee Herman Show (director). He directed the Off Broadway productions of A Very Merry Unauthorized Children’s Scientology Pageant (Obie Award), Gutenberg! The Musical! (Drama Desk nomination for Outstanding Director of a Musical) and Hell House (Drama Desk nomination for Unique Theatrical Experience). Timbers’ current projects include David Byrne and Fatboy Slim’s Here Lies Love at The Public Theater and Rocky in Hamburg, Germany. His upcoming projects include Love’s Labour’s Lost, A New Musical for Shakespeare in the Park (adaptor and director).

Sonya Tayeh (Choreographer) was born in Detroit, Michigan and received a B.S. in Dance from Wayne State University. Her stage credits include The Last Goodbye (Williamstown Theatre Festival), Spring Awakening (San Jose Repertory Theatre), Cirque du Soleil and The Endurance to Move, Battles and The Root of Me (Sonya Tayeh Dance Company). Tayeh has directed and choreographed world tours and performances for Madonna, Florence and the Machine, Kylie Minogue and Miley Cyrus on “The American Music Awards,” “The Voice,” “The X Factor” and “The BRIT Awards.” Her further television credits include “So You Think You Can Dance,” “American Idol” and “Opening Act.” Tayeh’s concert credits include work at Los Angeles Ballet and Kansas City Ballet. She is a recurring choreographer and judge on the number one Fox hit “So You Think You Can Dance.”

The Tony Award-winning Old Globe is one of the country’s leading professional regional theaters and has stood as San Diego’s flagship arts institution for over 75 years. Under the leadership of Artistic Director Barry Edelstein and Managing Director Michael G. Murphy, The Old Globe produces a year-round season of 15 productions of classic, contemporary and new works on its three Balboa Park stages: the Donald and Darlene Shiley Stage in the 600-seat Old Globe Theatre and the 250-seat Sheryl and Harvey White Theatre, both part of The Old Globe’s Conrad Prebys Theatre Center, and the 605-seat outdoor Lowell Davies Festival Theatre, home of its internationally renowned Shakespeare Festival. More than 250,000 people attend Globe productions annually and participate in the theater’s education and community programs. Numerous world premieres such as The Full Monty, Dirty Rotten Scoundrels, A Catered Affair and the annual holiday musical, Dr. Seuss’ How the Grinch Stole Christmas!, have been developed at The Old Globe and have gone on to enjoy highly successful runs on Broadway and at regional theaters across the country.